After your unsuccessful flight from the Shadowlands you find yourself as a ghost in this world. Fortunately you are able to control 4 brave characters on their search for your dead body to finally bring you back to life. I think this was the first game really explaining why you control your characters. And it got some other nice ideas as well, such as the light from the torches that behaves pretty realistic. if you go further away from the light-source it will get darker. Well made. The game creates a nice atmosphere that is different to most other RPGs. You got quite some strategical options, but the game is in real time.

A slightly above the average RPG that brings in some new elements, some good, some not that good, still a good choice.

Yet another novel-concepts-but-poorly-implemented games, Shadowlands purports to be revolutionary in ways its title implies: through the use of shadows that everything realistically casts indoors according to lighting positions. Unfortunately, this creative idea also makes the game very frustrating to play, as items and levers are often obscured by shadows to make out. Cumbersome interface and arcade-ish combats do little to rescue the game from oblivion. 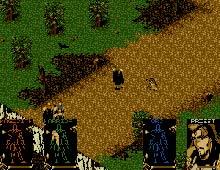 People who downloaded this game have also downloaded:
Shadoworlds, Lord of the Rings 1: Fellowship of the Ring, Lord of The Rings 2: Two Towers, Betrayal At Krondor