Rings of Power is one of the rare isometric RPGs on SEGA Genesis (Megadrive in Europe) that is much more similar to computer RPGs than typical console fare. It also happens to be very good, as well as one of the longest RPGs ever made for consoles. Although not technically perfect, the game has its own charms and Your mission is to collect all 11 Rings of Power and use them to remake the Rod of Creation to restore the Golden Age of the realm. But first, you must assemble a party of 6 members, one from each class of magic users: Sorcerer (yourself), Knight, Archer, Conjuror, Necromancer, and Enchanter. This requires you to visit various villages and carry out tasks set by the head of each order. Once your group is complete, you can then embark on the proper quest.

Rings of Power is not your typical console RPG. For starters, it is played from an isometric perspective, much like Populous. Navigation is a frustrating at first, especially since you can move in only 4 cardinal directions. But once you get used to it, you will be able to move quickly. A nice touch is that the landscape is actually a globe, so if you keep walking in one direction, you will eventually come back to the starting point. The gameworld is huge, and contrary to most console RPGs, you can explore most of it from the very beginning - no need to find balloons/dragons/ships to get to new areas.

Another facet that makes Rings of Power different from other console RPGs is the focus on magic. Weapons and armor are not used at all in this game, so you rely solely on spells in combat. The battles are turn-based, played from the same isometric perspective, and occur randomly throughout the game (although you can see the monsters before combat begins, so you have a choice of running away from it). Another difference - and one of my favorites - is the cool trading system. This works similar to Suikoden games: each town has a special "trade item" that is exclusive to that area, which means there are plenty of opportunities to buy goods and sell them for profit elsewhere in the world. You also have to pay attention to food and water in this game, much like Dungeon Master except much more simplistic. In another twist, you can kill just about anyone in the game - including innocents and plot-critical NPCs. Naturally, you won't be able to finish the game if you kill someone who has one of the Rings or knows where to find it.

The game starts out slowly, but becomes quite addictive as your party grows bigger and more powerful. In this respect, Rings of Power is similar to Wizardry and Bard's Tale games. There is only a few types of monsters, but that doesn't take away from the fun since a lot of them are very hard to kill. The puzzles are also quite interesting - some even fascinating - even if most of them are variants of the "find item X and bring it to person Y" errand-boy puzzle. With a huge gameworld (over 40 hours of gameplay), interesting game mechanics, and a flurry of smaller innovations, Rings of Power is a charming RPG that truly breaks the mold on consoles. Too bad it was never made for PC (according to Naughty Dog's page, it actually was designed for PC until EA decided at the time that Genesis games made more money), but thanks to today's emulators you can now experience this forgotten game. Highly recommended! 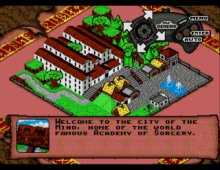 People who downloaded this game have also downloaded:
Pool of Radiance, Lord of the Rings 1: Fellowship of the Ring, Bahamut Lagoon, Ultima IV: Quest of The Avatar VGA, Lord of The Rings 2: Two Towers