The first volume in the great but simple roleplay series. You can create up to six different characters each with their own look. There are of course the most usual features included suck as experience points, skills etc.

You can explore many different dungeons, castles and caves. The combat engine is very simple where each of your characters is located in a row and that means only certain people can reach the enemies when you fight. This is not seen in all other roleplay games. The games also has a rather special of showing that your characters are wounded or has lost am arm etc. by showing only one leg at the picture. I suggest you get this game if you like roleplay games.

A nice little classical, yet not widely known RPG we got here. It's somewhat reminding a bit of the older Ultimas. Your group of wandering Adventurers searches through dungeons, fights monsters, finds treasures. It's all there, the fights are pretty wellmade, character stats are not too complex, but still enough to satisfy the RPG-Freak. Over all an enjoying game for fans of the old Computer-RPGs.

Phantasie games are early RPGs that should be credited as among the first to feature excellent combat options (e.g. different styles of attack), "bank" concept where you deposit the loot, and excellent variety of spells and monsters. These games were a big hit on Commodore 64, but their 4-color IBM port, predictably, didn't do as well. Too bad Phantasie 2 was never ported to the PC.

Explore different dungeons, caves, towns and castles. Funny combat engine. Goal of the game is to defeat the Black Knights who have taken over your island. Nice thing is that you can store your money on some bankaccount. 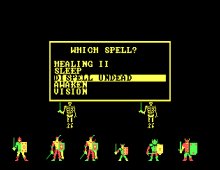 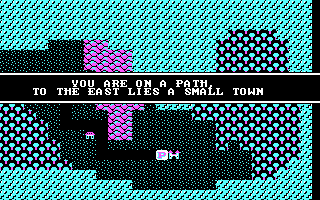 People who downloaded this game have also downloaded:
Phantasie 3, Bard's Tale 1, Betrayal At Krondor, Ultima IV: Quest of The Avatar VGA, Eye of The Beholder 1