Tom Proudfoot's first published game, Nahlakh, is a traditional top-down role-playing game that pits your party of eight adventurers against a force of evil that is threatening the land. While the crude graphics and the really hard first fight with a tribe of kobolds may scare away a more casual player, this game is a nugget of gold for the fans of the genre.

The turn-based combat engine is quite easy to learn and among the best I have seen in role-playing games. Sporting such nice features as targeting specific body parts (the groin being my favorite), fatigue and various states of injury (bleeding, poisoned, stunned, down etc.) it makes the combats a joy to go through.

Skills and experience are both handled extremely well here. A character advances only in those skills that he uses and every character is able to learn any skill (except magic and prayer). There are some skills that are not usable in the game at all, though, but that is a minor fault.

Magic system is pretty much copied from the Ultima games, with each of the over hundred spells consisting of three magic syllables. But unlike in Ultima, you actually can experience with the spells and deduct new variants from those you already know.

The game is nicely balanced to keep you on the edge of your seat. Each time you think you have got the upper hand in combat, it's time to move on to the next dungeon where you will again be fighting for your life. But it is also really easy to get killed if you enter a place where you aren't supposed to go yet.

With the staggering amount of different magic items (14,000 different weapons for example) and nice user-friendly features (automap, healing the whole party by one command and the lack of random encounters), Nahlakh is very much recommended to all who like a good RPG.

Note: Faster computers may need a slowdown program to run the game. It works well with my 233 MHz one, but crashes on a friend's 400 MHz. Tom Proudfoot has recently released the game as freeware. 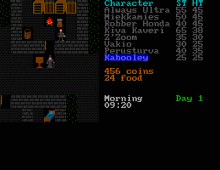