Lords of Midnight 3: The Citadel

The first official PC version in Mike Singleton's celebrated Lords of Midnight series, Lords of Midnight 3: The Citadel is also the last. In stark contrast to its predecessors, LOM3 is an absolute mess of a game that serves as a good example of why having just a grand ambition is not enough for a game to succeed. Even PC Gamer, the magazine that is biased in favor of any game with great 3D graphics, recognizes the Real Dog behind the graphics:

"Back in the old Commodore 64 days there were a couple of games called Lords of Midnight and Doomdark's Revenge. Both of them would now be forgotten if designer Mike Singleton hadn't decided to complete his trilogy with what is, essentially, Lords of Midnight III: The Citadel. But since no one would pick up the third installment in a series they've never heard of, Domark wisely opted to publish it as Lords of Midnight -- although if they'd been really smart, they wouldn't have published it at all...

In his foreword to the documentation, Singleton describes his creation as a dream combination of a strategy game, adventure game, and roleplaying game. "Despairing of an appropriate label," he decides to "suggest a new category of game" just to describe Lords of Midnight. "Epic" is what he decided to call it.

LOM begins with the gamer in control of good Prince Morkin, whose father has disappeared while trying to destroy the villain Boroth Wolfheart. Morkin has several allies working with him, and these allies travel across the land completing quests linked to the central quest. These allies often come with their own armies, and you must gain more allies to raise a large enough force to defeat Boroth and rescue Luxor.

The world of LOM is pretty large, and you use a map to range across it and direct your allies. This leads to one of LOM's more interesting ideas -- letting you actually play as a number of individual characters, in different areas of the land. See, rather than exploring with a party in first-person, you explore alone in the first-person 3D mode, and send your allies on quests by giving them traveling orders and tasks to perform. You can then jump in at any time, taking over and playing as any of the characters. You'll even have different modes of transportation at your disposal, such as flying on the backs of dragons and using boats to travel via water.

The big ideas don't stop there, either. LOM seeks to incorporate intricate character interaction, first-person exploration, map-based strategic control of armies, control of multiple characters on different quests, and even a detailed log to record all the goings on. If it had all come together, the game may well have deserved the "epic" name; but instead, each component is poorly executed -- and none mesh well.

Even the basics of LOM get in the way. The graphics and sound are so outdated as to be instantly ready for the bargain bin. The interface is cumbersome in the extreme, myriad functions and controls that are unclear or so sloppily implemented that you'll find the simplest task a chore. A larger problem, however, is the terrible character control. Just moving through the game world is almost impossible, thanks to controls that send you spinning in circles and moving in exactly the direction you don't want to go. Just figuring out how to get around in the damn game becomes more challenging that solving the quest.

This is a classic example of aim exceeding grasp, and in the end, even the game's most commendable ambitions wind up buried in one of the most incompetent executions in recent gaming history." Truly a disappointing end to one of the most unique and ambitious RPG/strategy hybrids. If you are curious as to why the first two games receive such praise, I urge you to play Chris Wild's excellent PC conversions of Lords of Midnight and Doomdark's Revenge (both reviewed and linked on this site) instead. 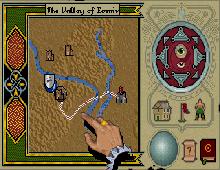 Lords of Midnight 3: The Citadel screenshot

People who downloaded this game have also downloaded:
Lord of The Rings 2: Two Towers, Lord of the Rings 1: Fellowship of the Ring, Dungeons & Dragons: Warriors of the Eternal Sun, Dungeon Master, Eye of The Beholder 2