Gateway to the Savage Frontier

Gateway to the Savage Frontier and Treasures of the Savage Frontier are the last two releases in SSI's famous but by-now-overused "Gold Box" engine. Both games take place in the world of "Savage Frontier," a welcome change from the worlds of Forgotten Realms and Dragonlance used in most other Gold Box games. Gateway starts with your party drugged and robbed blind of all possessions. Soon, you get involved in a brewing political plot, and assigned the monumental task of defeating the evil wizard Vaalgamon. In the sequel Treasures of the Savage Frontier, the action starts after the first game leaves off: you are summoned to help the dwarves in their battle against the evil forces of Zhentil Keep.

If you have played Gold Box games, you'll know exactly what to expect here: a solid blend of real-time first-person perspective and turn-based isometric combat. Similar to other Gold Box games (and especially the Krynn series), there is a LOT of fighting in Gateway and Treasures: so much so that anyone who dislikes AD&D mechanics will likely feel frustrated. Fortunately, the mostly interesting stories help keep things interesting. The best thing about these two games in my opinion is the character-specific side-quests: in Gateway, there are two NPCs that give you access to optional side quests, as well as different endings to the game. As befits the final Gold Box game, Treasures adds two welcome features: the effect of weather in battles, and the ability to call in reinforcements. Die-hard AD&D fans might complain about the low level caps (for example, eighth is the highest fighters can reach), but in a way, this serves as a nice throwback to the classic Pool of Radiance. All in all, two worthy additions to every RPG's library, although the engine is clearly "long in the tooth," showing its age, and you still have to slog through far too many battles. 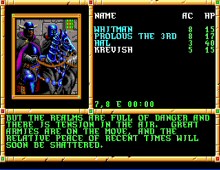 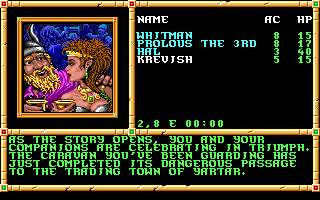 Gateway to the Savage Frontier screenshots

People who downloaded this game have also downloaded:
Treasures of the Savage Frontier, Curse of the Azure Bonds, Pools of Darkness, Pool of Radiance, Secret of the Silver Blades