Dark Phear is an excellent freeware multi-character RPG created in Quick Basic. The plot is negligible, but somewhat interesting: last night you dreamt of Alicia, your long-lost love who disappeared from town ages ago. You woke up, only to find King Theos, ruler of the kingdom, cursed by an evil (of course). Your quest is to find the golden fruit, the only means to save the King, and to secretly search for Alicia.

The game is a console-style RPG, in similar vein as Phantasy Star. This means the game is "RPG-lite," with tiny anime-style characters moving around on attractive tile-based gameworld, and no need to memorize reams of statistics. Compared to many freeware RPGs, some concepts in Dark Phear are quite inventive. For instance, you can choose the areas (e.g. strength, magic, agility) to allocate points to when anyone in your party gains a level. The battle screens are exactly the same as the system used in Phantasy Star III: you select the style of attack (for weapons) or spells to cast from a menu. There is also the "Defend" option - not seen in many freeware RPGs. The game shares the same weakness as most other console-style freeware RPGs: it's a bit too short, and veteran gamers will be able to complete it only a few hours. Still, like Mysterious Song, Dark Phear is an enjoyable romp that will keep you occupied while you are playing it. The current version is Beta, but it plays pretty well and I didn't encounter any bugs. Well worth a look. 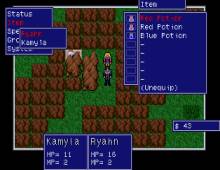