Arguably one of the best RPGs ever, this game has managed to somehow be excluded from every single Hall of Fame lists. Dark Heart of Uukrul rivals the best RPGs out there! Turn-based combat with great (albeit difficult) puzzles and original spells are only the beginning. Your mission is to collect all fragments of the evil Uukrul's heart in order to destroy him.

There are many innovations in the game that sadly aren't well known since the game did poorly in stores. For starter, the writings, although few and far between, are excellent. You'll periodically find clues or magical writings by the late sorceress Mara, which are crucial to solving puzzles and measuring your progress. And what puzzles there are! To illustrate how original and unique puzzles in Uukrul are, let me just give one example: in one area, you'll come across strange riddles on different walls. After looking at the automap and matching riddle positions to the map, you'll realize that the area is one giant crossword puzzle, and the riddles are clues to each word in the puzzle! When I discovered this, I shook my head in amazement at how ingenious the designers are. Typical dungeon riddles, move over :)

The game also shines in every other respect-- many spells and prayers for your wizard and cleric to cast, a lot of tough monsters and loot, and excellent automap and teleporter features. The only disappointment I had with the game was the fact that character creation was somewhat weak. But given how difficult the game gets in later stages, perhaps it's all for the best. Uukrul is a definite must-play for any dungeon master or anyone remotely interested in the genre. 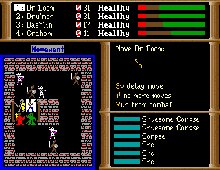 People who downloaded this game have also downloaded:
Dragon Wars, Knights of Legend, Dungeon Master, Betrayal At Krondor, Curse of the Azure Bonds