Dark Disciples is a fun "lite" top-down RPG that emphasizes thieving skills over battles. You start the game as a village denizen in a typical fantasy town, going about your daily business. But it won't be long before you become a grudging new recruit in the army of Lord Saradin, having to work to repay your dead father's debt.

The gameplay is typical top-down RPG that you have seen many times since the days of Ultima 1. Talk to people, kill monsters, and get better loot and stats as you progress. The game starts somewhat slowly: it gets interesting only after you enter Lord Saradin's service, which is when you reach about ninth or tenth experience level. Once you are in his army, you will be able to complete three lengthy campaigns, each of which features a unique set of monsters, terrain, characters, and weapons. One campaign is set in the cold mountains, one in the plague-ridden swamps, and the last in the burning desert. These campaigns are reasonably long, and are packed with enough neat weapons to keep you playing to the end.

Like most top-down RPGs of yore, combat in Dark Disciples is turn-based. During each turn, you can attack, cast spells, use objects and use options. RPGers who prefer exploration and interaction than heavy combat will be glad to know this game focuses on thief skills: picking locks and hiding in shadows will get you much farther than running to a horde of monsters with your sword swinging. Last but not least, Dark Disciples features a neat Might and Magic-style inventory system: just drag items on to the right slot on the diagram of your character to equip them. It is both intuitive and attractive at the same time.

With crisp SVGA graphics, a decent if banal plot, and a fun gameworld teeming with monsters and NPCs, Dark Disciples is recommended for fans of RPGs - especially fans of top-down classics that pay more attention to skills than complex stats. Recommended! 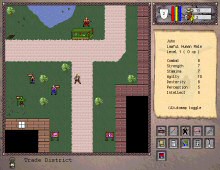