Let me start by saying that if you aren't a roleplay game fan don't bother reading on as only true roleplay fans will find this game worth playing. You start the game in a city which you can then explore. The movement and general interface is simply bad and boring. You move your character around with your mouse or the arrow keys. The poorly done animation makes it look like there is something wrong with your characters legs or something similar.

Daemonsgate does offer the classic parts from regular roleplay games like unlocking and picking doors, inventory screen etc. but it's the general gameplay that is lacking not to mention the lack of a good story that can usually save any roleplay game from being regarded as a poorly done game. Seems like the developers failed in both things with Daemonsgate.

One of the few old games that failed commercially despite an ambitious marketing campaign... which in this case includes a 30-min "The Making of Daemonsgate" video with the first copies.. mine still works G. The game really *deserves* the bad sales it got, due to poorly designed levels (the final Demon's dimension in particular is almost impossible to get through), banal plot, and repetitive dialogues. Underrated, sure, but not by much -- recommended ONLY if you are an extremely patient gamer who have finished all other RPGs and simply must play another one.

The game is very old, so you should not expect to muhc of the grafics, also they where good in the time the game was programmed. The Game is a epic RPG, wich will forfill lots of RPG player dreams, modern games cant reach. Beside a detailed inventory (head, breast, arm, legs, right and left Hand, belt, backpack,..) and various character abilitys (strenght, wisdom, agility, charisma and lots more) and skills ( over 20) wich can be improved in many diffrent ways through 8 levels. Along with many other fancy opions (like you can talk with everyone you see about everything, big knowlegde database, many locations, varios random ecounters, etc) the game provides RPG fans with many great things.

There are a few weak parts on the game tho. for instant, the fighting (realtime like the game) is very weak and partly confusing. And if you accidnetly skip to a fwd part in the story (can only happend if you do not follow the main plot strictly) you may make the game unfinnihsable.

Another sadly bad made thing in the game (beside minor bugs like male pictures with female names on random people) is the HUGE world. Every epic fan will now shout, but belive me, the world is huge, and there aint no automap. You can literly spend hours, searching for a city, or even worse, for a certain house in a city.

So all in all: For epic RPG fans, who have no problem with uncomftable controlling, the game is can be alot of fun. For everyone who needs modern Click and action control, for everyone who cannot live wiht older grafics and for everyone who does not like to read text, this game is no fun. 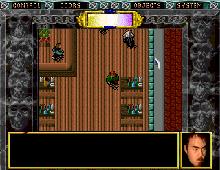