Companions of Xanth is certainly an amusing game with bright and colourful graphics, lots of things to do, and a reasonably large game world to explore. The humour is gentle even if it is a little painful on occasions -- especially when it resorts to rather juvenile, though mild, sexual innuendo. Interestingly, this problem would not have arisen had the designers allowed us the choice of playing either Dug or Kim (what a good idea!) as many of these allusions simply would not be viable from Kim's perspective.

Though I do concede that the Xanth novels set the precedent for much of the humour, and you shouldn't let my quibbling about this put you off as the game is certainly enjoyable enough overall to keep you playing.

Yes - I AM a fan of Piers Anthony. I've read most of his books and - of course - most of the Xanth-Saga. No need to say that I loved those books... I've heard that there was a game out, but all I was able to find was a text-adventure, which I lost during my big Harddisk-Crash (Dang!), but found again months later (it's up at our site - "A Journey into Xanth"). And then there it was, when I hadn't even searched for it... O.K., if you read the books you MUST download it, if not - give this game a try, you can play it without having read about Xanth (but I strongly recommend those books - they're FUN!!!).

Companions of Xanth is a charming game based on Piers Anthony's "Demons Don't Dream," in which two humans compete for a prize without knowing that two demons are using them as tools in their own wager. Like the novels, puzzles are heavily pun-related in ways reminiscent of Infocom's Nord and Bert, but a lot easier. Most puzzles are also not related to the plot, and the game is far too easy. It's a fun game, but not up to par with other Legend releases. Recommended only for fans of the novel and novice adventurers. 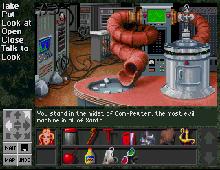 People who downloaded this game have also downloaded:
Betrayal At Krondor, Knights of Xentar, Lands of Lore: The Throne of Chaos, Curse of the Azure Bonds, Bahamut Lagoon