Challenge of The Five Realms

Challenge of The Five Realms (a.k.a. Spellbound in The World of Nhagardia) - this sadly overlooked RPG is part of MicroProse's brief foray into the genre. Although the setting is typical fantasy world, the plot is anything but typical: as a king of the Five Realms, you must disguise yourself and roam your empire to avert eventual doom and unite the bickering Realms. The plot moves along with vibrant graphics, memorable characters, and numerous side quests to guarantee months (if not years) of gameplay. A truly epic game from Microplay-- highly recommended for both casual and die-hard RPGers with lots of time on their hands ;) Designed by the same team that brought us the cult classic Bloodnet who later left MicroProse to form Take 2 Interactive. 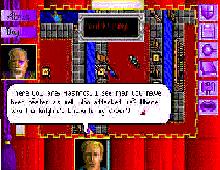 Challenge of The Five Realms screenshot

People who downloaded this game have also downloaded:
Lands of Lore: The Throne of Chaos, Ultima 6: The False Prophet, Betrayal At Krondor, Eye of The Beholder 1, Bard's Tale 1