Bones: The Game of The Haunted Mansion

Bones is an excellent freeware text-based RPG that is no different from other RPGs at first glance, but offers plenty of innovative features that will grow on you the more you play. The objective is similar to other Roguelikes, except that you don't see yourself represented by an ASCII character: go as deep in the haunted mansion as you can to discover untold riches.

You interact with the gameworld Bones via an effective menu-based system that lets you ATTACK, OBJECT (pick, use or drop), COMMUNICATE, STATUS, REST, and access game options. It works rather well, except it's a bit annoying to see "stock" commands like TAKE JEWELS listed at all times, even when there is no jewel you can take in the current room (the game informs you accordingly). One of the best things about the game is that the haunted mansion can be randomly generated, making each session a unique gaming experience.

The way enemies (skeletons, in particular) is coded is well worth mentioning. In contrast to most other RPGs, the skeletons in Bones have their own "quirks" that make them different from each other. Some skeletons, for example, can only be hit by weapons but not by spells, while it is the other way around for some others. Some skeletons run away at the sight of you, while some will chase you for as long as it takes. Some skeletons will even steal your things-- these are the most annoying because you must quickly kill them before they exit the room, lest you will never get those possessions back. The lower you go, the tougher skeletons will get, making the game much more challenging.

Overall, Bones doesn't take itself too seriously, and it is by no means a revolutionary game, but it does accomplish what it sets out to do: immerse the player in a fun and challenging fantasy world. If you want an epic RPG, this freeware gem is not for you. But if you are interested in what fun Roguelikes you might be missing, Bones is definitely worth a look. 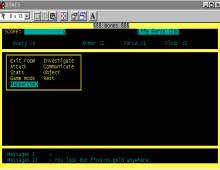 Bones: The Game of The Haunted Mansion screenshot