Solomon's Key: Another Version is a neat freeware clone of Solomon's Key, a neat puzzle game from Tecmo that was released on just about every 8-bit computer and consoles including the PC - thought the conversion was horrible. Originally a Japanese game, this fanmade game has been translated into English by a fan. A succinct description in the translator's words: "...[you] control a magician with the powers of Stone and Fire; Stone allows you to create or destroy stone blocks, Fire to shoot a fireball. Each stage is a "room", in which you must place blocks in the right places to act as platforms or barriers, creating a path to the key to unlock the exit from the room. All this while dodging or destroying Gargoyles, Goblins, and various other enemies. Long explanation, but a ridiculously easy game to play once you get into it. It's a great way to kill some time if you're bored. There's play instructions in the readme."

The level design is far from the ingenuity of, say, Sokoban or Chip's Challenge, but SKA is fun while it lasts. This version features dozens of levels, an intuitive user interface, and crisp anime graphics that remain faithful to the original. If you enjoy 2D puzzlers that are not too taxing on the brain, this neat little freeware gem is well worth a look - and it's much better than the awful-looking CGA official PC version of Solomon's Key that was made way back in 1988 (also reviewed on this site). 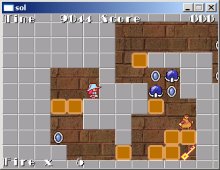 People who downloaded this game have also downloaded:
Solomon's Key, Lemmings 2: The Tribes, Lemmings Chronicles, The (a.k.a. All New World of Lemmings), 3D Lemmings, Pharaoh's Ascent