Pharaoh's Ascent is one of the most challenging and most innovative arcade-style puzzle games ever made - too bad the game remains unknown to most gamers due to limited on-line-only distribution on a shareware basis. The plot: you are an Egyptian soul who is going on a journey after death towards the Kingdom of Osiris. Egyptian God Set himself has set before you traps, trials, and evil monsters to stump even the most veteran puzzler.

Your job is to get past all of them and take your place by the side of Osiris. But this won't be just some puzzle solving mental exercise. In addition to arranging pillars in Tetris tradition, you will have to jump, dodge, and run your way past everything from the undead to menacing spiders - in the best Lode Runner tradition, only many times more difficult.

In contrast to most reflex-oriented puzzlers that offer either only a dozen levels, or hundreds of levels that resemble one another, Pharaoh's Ascent offers 91 rooms, each of which contains a unique set of puzzles and challenges. These rooms are organized in 6 levels of a pyramid: as you move up the levels of the pyramid, the puzzles become more difficult, requiring new skills beyond the ones you used on the last level. The puzzles require a combination of wit, timing, and reflexes: you will often have to carefully arrange pillars and stones, and move the support block to take down the whole thing at the right time. At the same time, you must kill or avoid enemies, and open up the way to get the keyhole that will open up the next room. You will sometimes have to push rather than destroy blocks to make a staircase to the upper level. The possibilities increase with higher levels, and pretty soon you will find yourself cursing and gritting your teeth at the sheer challenge - yet you will keep trying nonetheless. It took me dozens of tries to pass some low-level rooms, and while it was frustrating, solving each room is very satisfying. Fortunately, the game provides automatic online hints if you get stuck in the room for too long: each room has three incremental solutions that eventually solves the whole puzzle.

If you enjoy Lode Runner, Deadly Rooms of Death, or other fiendish puzzle games, Pharaoh's Ascent is a must-have addition to your collection. Despite some amateurish graphics and drab palette, this game from a very small shareware team has a lot of heart - and enough challenge to make you lose a few billion braincells and sleep. 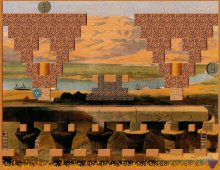 People who downloaded this game have also downloaded:
Lemmings 2: The Tribes, Humans 2, The, 3D Lemmings, Incredible Machine, The, Lemmings Holiday