When it was first released in 1987, Geoff Crammond's genre-busting masterpiece The Sentinel immediately acquired a cult following and achieved considerable commercial success. Definitely one of the most unique games ever made, The Sentinel combines quick action, strategic thinking, and puzzle solving into an addictive experience.

More than ten years after the original release, Psygnosis released Sentinel Returns, an excellent remake of the original that, unfortunately, remains largely unnoticed and unknown. Sentinel Returns is basically The Sentinel with a much-needed graphical and aural facelift that make the experience even more captivating. Your goal is to usurp the Sentinel, a being that guards the alien chessboard-like world to which you have been sent. To unseat the Sentinel, you must rise to a position both higher than and with a direct view of the Sentinel in order to drain his energy. You raise your position by building boulders, installing robot hosts on those boulders, inhabiting the robot hosts, and then scouring and draining the surrounding territory of energy sources.

The game is played from a first-person point of view, and the interface is simple. Players need only learn a couple of mouse clicks and three or four keyboard commands before diving in. Although the submergence is initially simple, each level naturally becomes progressively more difficult. One weakness of the game is the fact that the levels are more or less the same, only with different background graphics. On the other hand, if you enjoy a good challenge, the game's progressively harder levels will be too absorbed in the game to notice its repetitiveness.

Like its 1987 predecessor, Sentinel Returns is a true genre buster. Success requires quick wit, good aim, careful planning, and the ability to deal with positional puzzles. It is very innovative, and incredibly addictive once you get used to the controls. The moody music (written by scaremaster John Carpenter) and eerie new-age terrain will grow on you after a while. Make no mistake about it, though, Sentinel Returns is a difficult game that might frustrate a lot of people. The player is rewarded for perfect moves: you gain advantage in later levels from not only defeating the Sentinel, but from how well you do it. Strategists who prefer reality-based games may have a problem with the abstract concepts in this game. Although the game's learning curve is isn't flat, anyone who enjoys real-time puzzles that require some hand-eye coordination will be able to quickly pick up the concepts. With over 650 levels to conquer and multiplayer options, Sentinel Returns will keep real-time puzzle meisters happy for a long time to come. Definitely an old game that was pulled off the store shelves long before its time. Highly recommended! 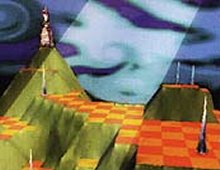 People who downloaded this game have also downloaded:
Lemmings for Windows 95, Sentinel, The, Lemmings 2: The Tribes, Incredible Machine, The, Wing Commander: Privateer