One of the most original games of all time, The Sentinel is one of Geoff Crammond's early games, and quite an unusual one for him as it is everything but a racing game. The PC version, like most other conversions of Commodore 64 classics, came and went off the shelves unnoticed by most gamers.

So what is so original about the game? Almost everything: concept, gameplay, and even replayability-- and in the process, it combines elements from more than a few genres to mesh into an addictive whole. The Sentinel can best be described as an "energy management" game. You, the player, exist on an alien island floating in space, and you must navigate your way to the summit of the island. Success will allow you to move to a new, more difficult island. Each island is similar to a chessboard, but have many different levels, effectively hills and valleys, of various sizes. The "floor" is chequered. Your movement is performed by creating a replica of yourself and "beaming" across to it. You would then typically absorb the husk of your old body, thereby losing no energy. It is possible to ascend one level at a time, in this way, and so access the island's summit. But it's much more complicated than that: each island has a Sentinel, the bad guy who stands on the summit, and rotates 30 or 40 degrees every few seconds. If he can see the square on which you're standing, he will start absorbing your energy, which depletes rapidly. Now on the island, many of the squares have trees on them. A tree is the lowest unit of energy. You can make trees (although the purpose is obscure), boulders (which are equivalent in energy terms to two trees), or even replicas of yourself (robots, which are worth three trees). The Sentinel is programmed to start absorbing from anything it can see that is useful. This is bad news for you, but the good news is you can absorb trees and boulders, and, ultimately (when you can see the square he is standing on), the Sentinel himself. Usurping his position of course means that you are now standing at the summit, which completes the level's objective. Boulders are particuarly useful, because you can use them to make an artificial platform on which to stand.

Overall, The Sentinel is a superbly ingenious, well-crafted game that is incredibly addictive, full of some very exciting moments to liven up an otherwise abstract exercise, such as when the Sentinel starts using Sentries to help him. The Sentinel might not appeal to anyone due to its very abstract nature, but with great gameplay and thousands of islands, it's a forgotten masterpiece that will occupy your times for weeks on end. Also check out the remake from 1998 by Psygnosis called Sentinel Returns, which upgrades the game with vibrant SVGA graphics, great sound effects, while retaining all the addictiveness of the original. 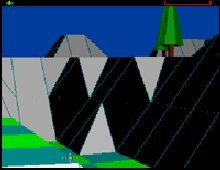 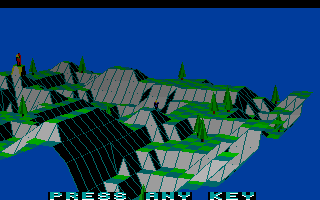