Quadrax is an excellent logic game that was the best-selling title in Slovakia and Czech Republic in 1996, the year of its release, but was little known outside these countries. The game is actually a PC conversion of a 1994 Spectrum ZX game of the same name, designed by David Durcak when he was at Ultrasoft.

The goal is for two adventurers to make their way through each level on their way to a rumored treasure. Along the way, they have to negotiate various traps and other obstacles. You control both characters, who must sometimes co-ordinate at the right timing to succeed, similar to the vikings in The Lost Vikings. As in Chip's Challenge and similar games, there is plenty of switches to toggle, blades to avoid, and many kinds of traps to negotiate. The good news is that the game's focus is on stumping you with physical puzzles rather than throwing hordes of creatures at you, so fans of brainteasers will feel right at home.

With over 100 varied levels, excellent SVGA graphics, and many devious puzzles, Quadrax is a great puzzler that will keep you glued to the screen for a while. I still haven't managed to pass level 14 or so, but perhaps you can do better :) Two thumbs up for this obscure old game. 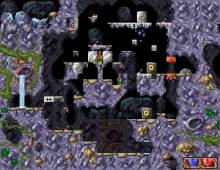 People who downloaded this game have also downloaded:
Lemmings 2: The Tribes, Lemmings for Windows 95, Lode Runner: The Legend Returns, Lemmings Chronicles, The (a.k.a. All New World of Lemmings), Lode Runner Online: The Mad Monks' Revenge