If there was ever an award for "perfect choice of designer for game sequels," Sierra would get this in 1994 when they tasked Jeff with designing a sequel to Broderbund's classic Lode Runner. The talented designer of The Incredible Machine delivered a game that is not only worthy of the name, but is also leaps and bounds better by adding new enemies, more ingenious levels, and best of all, a level editor where players can design their own torturous levels. If you love the game, check out Lode Runner Online: The Mad Monks' Revenge, the improved sequel with multiplayer support. 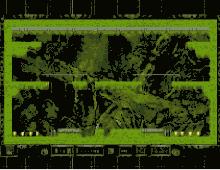