Drain Storm is a fun puzzle game, except its puzzle structure is much less rigid, meaning it won't make you pull out your hair as often as you did in DROD :) You control the "Effer-vessel," a small tractor-lookalike vehicle that's actually a tiny drain probe sent to investigate and stop the invasion of monsters on... someone's bathroom floor. Your goal is simply to survive long enough to find the ultimate evil that sends out these monsters, and destroy it once and for all.

Ignominious task notwithstanding, Drain Storm is a lot of fun to play. Like DROD, monsters do not move in real-time, but in lockstep with your move. In other words, when you move one square, they all move one square too. There is no time limite between moves, so you can take as long as you want to think about the best way. Unlike DROD, you are free to explore multiple screens at once, and there are no deviously placed obstacles that force you to discover the "one and only correct way" out of each level. On the other hand, you will face lots of different kinds of monsters at once, and since most of your weapons have limited ammo, you must plan your moves carefully. In addition to unlimited bubbles (hey, this is the bathroom after all) as your default weapon, you will collect and use bombs, missiles, mines, and different types of bombs.

Drain Storm is fun and addictive - although not in the same way as DROD. Perhaps the best way to describe this game is to say that if you find higher levels in DROD a bit too daunting and frustrating, Drain Storm's more fluid, action-style gameplay will be a refreshing change. Highly recommended to both fans of brainteasers and innovative action games alike. 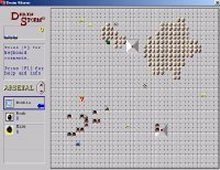