One of the most original puzzle games ever designed, Bridge Builder is an intriguing blend of real-world physics, puzzle, and economics. Your job is simple: build a structurally sound bridge across the river, over which trains should be able to go safely. With limited funds, you will buy various parts, then assemble them into a working bridge. What make the game a lot of fun are the excellent physics engine, and the wide variety of parts that allows you to build many different types of bridges. The further along you get with your particular project, the wider the rivers get, and thus completion becomes more and more difficult. Because you only have limited funds for each level, you have to be frugal and can't waste the different components.

After you get a hang of how the game works, Bridge Builder becomes a highly addictive game. So far, only the demo version has been released, and all work on the original has stopped after the author got in some legal wrangles over the name of the game (which has already been trademarked by a company). The good news is that he has started a new company, Chronic Logic, and released Pontifex, the true sequel to this wonderful game (and with a legally correct name ;)) in October 2001. If you are unsure about how great Pontifex is, the 15 levels in Bridge Builder (levels 8-15 appear after you beat the first 7) should keep you hooked for quite some time. Overall, a very unique and entertaining game that deserves much more notice than it did. 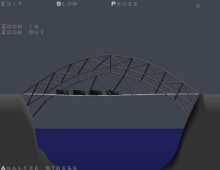