Diabolika 2 is a great sequel to Diabolika, a unique strategy/puzzle hybrid from freeware developer Blackeye Software. More of an update than a true sequel, Diabolika 2 nonetheless remains as fun as the original - and even more so, with improved enemy AI and graphics. Calling it "sequel" is a bit inappropriate, considering that it is not much more than a remake of the original game, with the same gameplay intact. This is not necessarily a bad thing, since the original Diabolika is a unique and addictive blend of action and strategy - not unlike Dark Legions. The gameplay, as described by Gamingworld in my review of Diabolika, goes as follows:

"Diabolika is puzzle game which you must use little characters to detonate and kill the demons. The whole point is to get a chain reaction with your little explosive guys so that you hopefully can kill all the demons off in one shot. You have a range of many "explosive" characters to use which are classified as tiles. You get the basic kind like the Straw Man which only attacks in one direction and at one square or you can get the great tiles like the "Magik Missile" which allows you to choose an eight squared target anywhere you want! The game gets fairly hard as you advance; the hard part is the fact that once you leave one demon after a round he will be added with the others. Then once that round is done next thing you know there are two demons, then it just adds on unless you're lucky and get the "good" tiles. Also adding to the challenge is different leveled Demons. It goes up to Demons that take three shots to kill."

If you like the original, or inventive action/puzzle games in general, Diabolika 2 will get you hooked. With improved graphics and enhanced AI, this is another winning freeware gem from Blackeye Software. 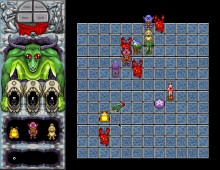