Chesshousers is a unique puzzler that unfortunately does not live up to its innovative premise. Although it has a chess theme, the game has little to do with chess: it is, instead, a brainteaser that consists of dozens of set-piece puzzles. Each level is a labyrinth, where you must move your alter ego (a strange-looking disembodied hand) to the king symbol. You can move in any of the four cardinal directions. However, your path is often blocked by obstacles, which must be cleared by chess pieces to make a path. For example, soldiers act like pawns: when moved, they will walk one step forward in the direction they are facing. Soldiers can destroy "crystal blocks" that are in the way. Queens are similar to pawns, except they can continue to move in the direction pushed, and - strangely enough - cannot destroy crystal blocks (you would think queens would be more powerful than mere pawns). Knights will explode when it hits a rock, or is hit by a pawn. Your disembodied hand will be killed if it gets into a line of sight of a Bishop (i.e. a diagonal line), or a Rook (i.e. an orthogonal line).

While the idea is interesting, the execution leaves a lot to be desired. First of all, the isometric 2D/3D view makes viewing the pieces very difficult, and you will often confuse one type of piece for another. The interface is cumbersome, and frustrating - you cannot even save the game at any time you want, but only after making a certain number of moves (restoring, therefore, often means you need to redo part of the puzzle). Fortunately, there are "teletransporters" which can transport the hand to a different position in the labyrinth, but they are few and far between. The level design is also boring - they are far too similar to each other, and there is no new element or surprise to cheer you up after you play the first dozen levels or so. All in all, a neat idea that could have been realized much better by a far better level designer. A wasted opportunity. 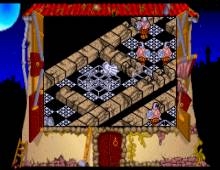