Adventures of Robbo, The

The Adventures of Robbo is a decent puzzle game by xLand Games, small developer who also developed two other shareware games published by Epic: Heartlight and Electro Man.

The game is a 2D puzzle game similar to Chip's Challenge. Your goal is to guide a robot to the exit on each level. Naturally, plenty of obstacles and puzzles stand in your way, ranging from lasers, crates, bombs, roaming enemies, and more.

New elements are introduced on almost every new level, so your interest won't quickly wane. On the whole, though, the game is not nearly as challenging or fun as classics like Chip's Challenge, mainly due to inferior puzzle design and too-easy difficulty level. Worth a look if you are new to this genre, but puzzle mavens should look elsewhere to exercise their brain. 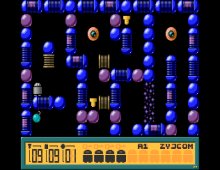 Adventures of Robbo, The screenshot

People who downloaded this game have also downloaded:
3D Lemmings, One Step Beyond, Atomic, Lemmings 2: The Tribes, 3 in Three