Dark Wizard is an excellent and highly underrated fantasy wargame from SEGA. Kyote's review at RPG Critic says it all about why fans of the genre should take a look at this SEGA CD old game:

"The golden lands of Cheshire have been thrust into turmoil and darkness by an immortal wizard bent on revenge. The king has fallen and you must be his successor; you must lead the armies of Cheshire to reclaim the land for the light. You must stop this wizard before he can resurrect the god of darkness. Are you up to the challenge?

Dark Wizard is a strategy/war RPG that never got the attention it deserved, due to its release on an ill-fated system (although it does seem to have developed an all too small cult following). Strategy/War is my favorite genre, and I have an extensive amount of experience in many of its more shining examples (get it?). And although the library of games comprising this genre has grown tremendously since Dark Wizard's release nearly a decade ago, I still find myself drawn to this game. Very simply, this game is a masterpiece, and my all time favorite.

The story is rather clichéd and simplistic, but immediately receives some life by allowing the player to choose one of four leaders. Each leader has a reason for wanting the Dark Wizard dead, and their stories convey this well. I also find in strategy/war games that simplicity is often better for the story, since it focuses the player on the gameplay and strategy. And it is here, the gameplay, where Dark Wizard has no equal. The battle system of this game is a thing of incredible beauty. It has the complexity to allow for customization, but isn't so intricate as to bog down the player in specifics. To other strategy/war buffs, it's in an exquisite balance between the Shining Force games and Final Fantasy Tactics (or Tactics Ogre). There is so much more I would like to describe, but I don't have the room. Play it for yourself; you'll see.

The other, more physical aspects of this game are also good, considering its age. The music of this game is composed primarily of themes, one for each leader, both good and evil. To be succinct, it is marvelous (especially for a system not known for sound); it's haunting, sad, inspiring, even threatening. I have to admit that the sound effects are a little lackluster, but they do get the job done. The battle sequence graphics in this game are very good. The soldiers and monsters look menacing, and their attacks and spells are quite well animated. The only problem I will acquiesce on is that some of the larger characters can become rather pixilated when fighting another large character. To summarize, the graphics are nothing special, even inferior, by today's standards, but shouldn't discourage any player from enjoying this game.

Another aspect of this game that I find to be excellent is its challenge and replay value. With four leaders, each with their own nuances to the quest, the gamer is put to the challenge four times. Which brings me to the challenge. This game is quite long and challenging for beginners and experts alike. This is a game quality that I have really begun to treasure in recent years (the decrease in the challenge of strategy and role playing games in favor for an increase in sales is a topic best left for another time). The AI of this game is quite efficient; so don't expect to simply march over your enemies. With 24 battles to win, and four leaders to win them with, you can expect to lose a significant amount of your leisure time."

If you enjoy games like Fantasy General, you will have a lot of fun with Dark Wizard. Similar to other console war games, Dark Wizard is neither as challenging nor complex as its PC counterparts. But the game makes up for these shortcomings in spades with dozens of interesting spells and units, sheer fun factor, and good length. It is also much more challenging than other strategy/war games on console, and even uses a hex-based system - something you don't usually see in console titles :) 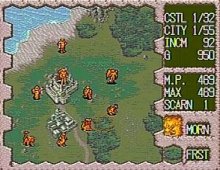