Baku Baku Animal from SEGA is a fun Columns variant for Windows 95 that can be played in 2-person mode via split screen. CD Mag's review explains it well:

"Baku Baku is Tetris with animal food. Basically, the idea is to get strings of touching like-foods (bananas, bamboo, carrots...), then get the proper animal head (monkeys, panda, rabbits...) to touch its respective dietary mainstay, thus allowing it to chow down, making your side of the board thin out and your opponent's thicken up.

Oh yes, Baku Baku is very much dependent on head to head action, wherein (like virtually all games of this type) the first side to fill to the top with fruit and animal head blocks loses. In one player mode you play against various goofy characters of different "intelligence" levels, but (and this is the really commendable part) Baku Baku also offers two player modem and TCP/IPX network mode, in addition to accommodating two players on the same PC, so that if you find that one other person who bought the game, you can connect to him/her. Baku Baku throws in rendered graphics, some interesting 3D effects (like the way the animal heads chomp the fruit when they connect), and plenty of really goofy sound effects. On the downside, there's no straightforward one player, non-competitive mode, and in the one player arcade mode there isn't a continue option to let you try again on the level you lost at. Also, despite what the box (and even the manual) says, there is no Internet multiplay option, which is a terribly misleading and disappointing oversight.

So, if you're feeling a little depressed because your life seems devoid of a good Tetris clone, then by all means seek this game out (or therapy)." 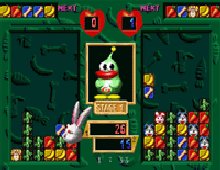