An extremely addictive puzzle game, Lose Your Marbles from SEGA was marketed as the game that is better than Tetris. "More addictive than Tetris or your money back!" is SEGA's claim, and it is not much further from the truth.

Although it is arguably not as addictive as Tetris in the long run, Lose Your Marbles is extremely addictive. Like all good puzzle games, Lose Your Marbles has an original concept that is easy to learn but hard to master. You play versus the computer or a friend, and the object of the game is to keep your board clear of marbles while your opponent tries to do the same. When you start a game, marbles are already placed on the board. You must align marbles of the same color in the middle row (called the pitch line), either in groups of three, four, or five, for them to disappear. As you clear marbles you will receive bonuses that effect your opponents by adding marbles to their board, and vice versa. Some of these bonuses can be a real pain. The refugee bonus, for example, dumps stone marbles, which cannot be eliminated, on to your opponent?s board. There are five different boards you can play on: dirt, grass, asphalt, concrete, and wood, and the bonus marbles? actions change depending on which board you?re playing on. There are three skill levels to choose from; level one is good for when you first begin to play while level three is extremely tough and recommended for expert players only. If you want to practice before starting an actual game, check out the helpful tutorial in the help menu and then do a practice round.

Multi-player options are limited to two players at one machine or one-on-one over a local-area network. Unfortunately, there are no Internet play options. The configurations for play are limited as well; you can?t change the assigned keyboard or mouse configurations. This is fine if you?re playing solo, but against a friend on the same machine, the keyboard layout for player one is downright uncomfortable. In single player, you use the arrow keys with your right hand to move rows and the space bar with your left hand to rotate the pitch line. In a multi-player game, one player has to use A, W, S, and D and the space bar. A gamepad can be used instead, but proves too unwieldy for a game of this type.

Overall, Lose Your Marbles is one of the best Tetris variants ever made. Bright colors, fun sound effects, and happy soundtrack enhance the experience. So, you may be wondering, does it actually top Tetris as the packaging claims? That?s a hard question. Tetris was ground-breaking when it came out in 1984; it has sold more than 40 million copies worldwide, and has withstood the test of time. It?s a classic that gamers are still playing today. Does Lose Your Marbles have that potential? Maybe -- it certainly has all the right ingredients, but only time will tell. Until then, you?ll have a blast playing the game, both in solo and multiplayer modes. 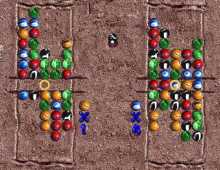 People who downloaded this game have also downloaded:
Lemmings 2: The Tribes, Super Tetris, Tetris Classic, Tetris (from Mirrorsoft), Block Out