A simple but fun puzzle game that plays like a primitive spiritual predecessor to Deadly Rooms of Death. The goal from game manual: "clear levels by making robots smash into one another. You do this by manipulating them to crash into one another using your player icon (the robots always move towards your player, so if you can get two robots moving on the same lateral plane towards you, then they are an easy kill.) When two robots crash into one another they form a pile of debris which can also be used to destroy robots. You get 10 points for each kill."

It may sound easy, but in reality Autobots is quite tricky, especially on higher levels where there are many more robots. Fortunately, you do have several special items to help in sticky situation, such as teleport, which transports you to a random, but safe, location on the screen. You start with 5 teleports, and get an extra one for every 10 robots you kill. Each new level also gives you one zapper, which kills alls all robots in squares contiguous to you. You can also skip either one move (thereby forcing the robots to move), or all remaining moves (useful for when the robots are nicely lined up and there is nothing left to do but wait for them to march to certain doom). Overall, a clever little game that is well the collection of puzzle fans. Fans of Deadly Rooms of Death in particular will find this an entertaining, nostalgic romp. 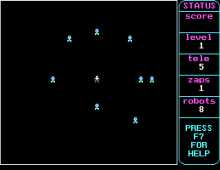