Simple solo or two-player brainteaser developed by Russian company GAMOS. Also known as Filler, which describes the game principle fairly well. You have to fill a board of different colored tiles starting from your corner by choosing from seven colors. The color you choose determines which tiles you will gain. You can't choose the color your opponent has selected in his last move. Can be played against the computer, but more fun against a human opponent. The game even supports LAN multiplayer mode—a rarity in puzzle games. I find the tiles a bit too small to be fun for long, and staring at the game after a while gave me a headache. But if you like visual puzzle games and aren't afraid of going color blind, give 7 Colors a try. The concept, at least at the time of its release, is unique, and the implementation is very good. If only the tiles were bigger, this would have been a Top Dog in my book. 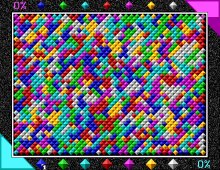