24 Knights is a fun little chess puzzle from NZP. The official word: "a chess puzzle consisting of 24 numbered knights randomly distributed among 25 chessboard squares. The object is to move the knights into numerical order in the fewest possible moves. The puzzle may appear easy at first since many of the knights are already in their correct position, but solving it in the fewest number of moves will prove challenging." A fun brainteaser to solve during a coffee break, but once you find the optimal number of moves, there is little reason to replay it again. Fun while it lasts, though. 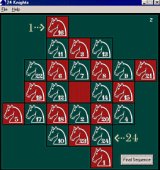 People who downloaded this game have also downloaded:
Adventures of Robbo, The, 3D Lemmings, 3 in Three, 221b Baker Street, 3-K Trivia