Alexei Pajitnov's blockbuster Tetris spawned many clones, but Puyo Puyo is one of the more worthy derivatives from the whole falling-blocks craze in the early 80s. First released on the Mega-Drive console by Compile, Puyo Puyo has all the qualities that keep puzzle fans hooked to the screen: bright, colorful graphics and great gameplay that not only gets you addicted, but also gives you a sense of accomplishment once you defeat your Puyo adversary, be it computer or human. As testament to the game's excellence, the series has taken on a life of its own, with many sequels, and it is today no longer labelled a "Tetris clone."

As with all great puzzlers, the concept of the game is very simple: the basic goal is to get 4 or more jelly/blobs (called "puyo") of the same color to be next to each other. Two puyos of random color are dropped each time. You can rotate these and move them freely. Puyos are considered touching if they are directly connected either horizontally, or vertically. In the One Player mode, you just have to keep going and the blobs will keep coming faster and faster. In Two Player mode, however, you have to keep playing until the other player (computer or person) loses theirs. Obviously if you fill up your screen, you lose the game. Eliminating a long chain ("combos") of many connected puyos naturally get you more points, but are more difficult and risky to pull off.

Although this game was released amidst a flurry of Tetris clones, the gameplay in Puyo Puyo is fresh enough and addictive enough for the series to stand its own. The Two Player mode in particular deserves special mention as the first successful implementation of multiplayer in a Tetris-style game. This is addictive old game!

Note: the game is in Japanese, but it shouldn't be hard to guess how to play. You will miss out on the funny dialogs between characters. 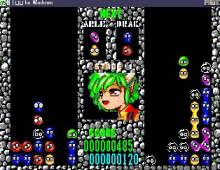