Dutch game where a gang of mouses lead by an evil wizzard kidnapped princess Dana. Redcat has the job of rescueing her. At the end of level 8, RedCat has to beat that evil wizzard.

RedCat 2 is a decent 2D platformer from Holland. The plot: Princess Dana has been kidnapped by a group of mice (!) led by an evil wizard. As the hero RedCat, you must rescue her by defeating hundreds of enemies spanning 8 levels. And naturally, you will face off with the evil wizard at the end of the game.

Aside from amusing antics of RedCat (his pose when firing a huge shotgun, in particular) and cool bomb effects, there is not much about RedCat 2 to recommend. The background graphics are drab, the gameplay quite repetitive after the first few levels, and there is no secret or surprises to discover. Oh, I like the fact that enemy mice drop down randomly from the sky, tied to balloons. But after the screen is swarming with them, all the fun more or less goes away :) The game is in Dutch, but there is very little text in the game to read. Recommended only to die-hard fans of platformers who are curious about obscure - and deservedly so - games. 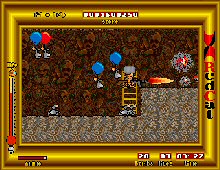