Scooter's Magic Castle is a fun edutainment title from EA*Kids, a superb but sadly short-lived series by Electronic Arts. Set in a cartoonish castle environment, the game includes 25 learning games and activities for children aged 5-8. A new game is waiting behind every castle door and stained glass window.

Similar to Broderbund's The Treehouse, each activity in Scooter's Magic Castle teaches a different subject or skill including typing, reading, problem-solving, creativity, and pattern recognition. The game sports a very intuitive interface that is mouse-based - one cursor does everything in the game. Colorful 256-color graphics, fun cartoon animation, and good music round off this neat game that would have established EA*Kids as one of the best edutainment producers around - had it been marketed more widely. Despite few reviews in magazine, though, EA managed to sell this game quite well directly to primary schools in the USA. 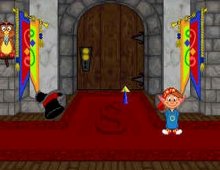