Part of the "Treasure Trilogy" from The Learning Company, which includes Treasure Mathstorm (coming up on the site soon :)) and Treasure Mountain (already on the site), Super Solvers: Treasure Cove is one of the best math games ever made for 5-8 year olds, bar none.

Similar to other Learning Co.'s titles, Treasure Cove requires knowledge in different disciplines to succeed, although algebra is the focus. You must solve problems requiring you to practice basic algebraic operations (multiplication, subtraction etc.), recognize words and phonics, and even solve riddles about sea creatures. Non-readers can click on the star fish to have the questions read aloud to them, although the voice is quite unappealing.

Overall, Treasure Cove is another enjoyable release from The Learning Company, featuring the same attractive graphics and gameplay as their previous "Super Solvers" games. 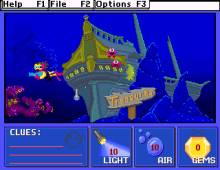