One of the best games in The Learning Company's "Super Solver" line, Gizmos & Gadgets is a great edutainment title that aims to teach principles of physical science found in everyday items to kids ages 8 and up. The plot: Morty Maxwell, the Master of Mischief familiar to Super Solver fans, is back with a vengeance. He has taken over the Shady Glen Technology Center and claims he can build the best auto, air, and alternative energy vehicles. Now he's challenging all Super Solvers to outrace him. To win, you'll need tobuild the fastest vehicle. But first, you'll have to collect all the parts you need for your racing gizmo.

Gameplay is a lot of fun, with vibrant SVGA graphics and pleasant sound effects. You will solve science puzzles featuring everyday gadgets such as wheelbarrows and wrenches, skateboards, and scissors. Then it's off to the races, where you'll meet Morty and prove that you're the real master of science. More than 260 puzzles and simulations will help kids understand scientific principles more effectively than in school-- they'll learn something new while having fun. Eight different puzzle types can also be independently adjusted to suit different skill level, making the game fun for adults as well as kids. And to top if all off, excellent on-line help that has been a hallmark in every Super Solver game is better than ever. Fast-paced action, fun gameplay, and great graphics will keep everyone in your family glued to the screen.

The premise of the game is that Morty Maxwell has taken over the technology center, and you have to go oust him, again.

But unlike in past Super Solvers games, instead of trying to find out which room he is hiding in, or which enemy he is masking himself as, you race him. You have to go around the building, which there are three (I'll get to that later), and find the parts for your vehicle. Now don't get me wrong, there is more than one type of part for every part of the vehicle, like different size engines, tires, kinds of bearings, wings, bodies, differentials, landing gear, etc. But getting these parts is no freebie; Morty has 'chimps' running around to stop you or get in your way, depends on how you look at it. They can also pick up parts as well as steal parts from you if you're not careful. But if you give them a banana, they fall asleep. Then you can pass by or retrieve a part they stole.

Like I mentioned earlier, there are three buildings, each for a different type of racing vehicle. One is for airplanes, blimps, helicopters and other vehicles that fly. The second is for traditional vehicles, gas powered cars basically. And the last building has alternatively powered vehicles, like electric or hydrogen powered.

Like a classic Super Solvers game there are puzzles that you need to solve. In Gizmos and Gadgets you only need to solve puzzles to unlock doors. There are a variety of puzzles that you will need to solve, like use magnets to create the shape, or balance the scale, or arrange the gears in order to push the button, or draw a line to the correct answer, or connect the circuit. 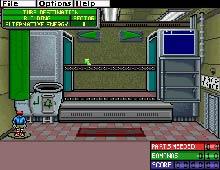