Designed for kids ages 7 to 10, Super Solvers: Midnight Rescue is a great educational game that aims at improving kid's vocabulary. Gameplay is similar to Spellbound, but designed for older kids. Morty Maxwell, the master of mischief, is up to his old tricks again, and this time the Shady Glen School is the target of his outlandish plot. Armed with paint that turns things invisible and five robot paintbrushes, he's trying to erase the school, and you only have until midnight to stop him.

To stop the evil mastermind, kids will need to read for clues and collect evidence to determine which of the robots is really the Master of Mischief in disguise. With more than 200 reading selections, including letters, diaries, and children's classics, and more than 400 questions, Midnight Rescue offers thousands of unique games to play. There are also on-screen definitions and pronunciations of more than 500 words to help build vocabulary. In addition to building vocabuary, the game also helps kids develop important comprehension skills, such as reading for main ideas, recalling key facts, and drawing inferences. The game also improves deductive thinking skills, as kids must gather, organize, and analyze information, and finally draw deductive conclusions in order to win. Midnight Rescue is definitely a masterpiece of its kind, and a must have.

Midnight Rescue was one of the first educational games I remember playing that I didn't immediately roll my eyes at. First of all, Midnight Rescue looked good. Next, while the “action” (such as it was) stopped for the educational parts, many of the stories you were reading actually related to the game you were playing, so it never felt like you left the game.

Midnight Rescue is a reading themed educational game for ages 7-14. In Midnight Rescue you take the role of a Super Solver, an intrepid investigator, who is trying to stop the evil Mortimer Maxwell, the Master of Mischief, from turning his old stomping grounds invisible. Morty has turned 5 paintbrushes into robots and hid himself in one of them. By reading and answering questions scattered around the school on marked cards (blue with a triangle) you gain details about the robot Mortimer is hiding in. As you explore the school you may run into the paintbrush robots as they go about their nefarious task. By taking pictures of the robots you can see and analyze the details you've collected. When you think you've figured it out make your accusation. If you're right you gain points that will move you towards the Super Solver trophy! You can refill your film at the machine, but there's only film when you answer questions. But be aware that you're on the clock. If the time reaches midnight the school with be forever erased.

The game itself has an extensive help system that will tell you everything to need to play the game and the story behind it. Midnight Rescue established elements that would find themselves into future games making Midnight Rescue the first what would become the Super Solvers series. 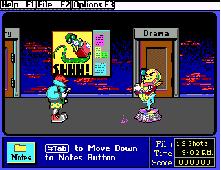