Rocky's Boots is an excellent educational game that teaches kids the basics of logic circuits that computers are based on. A true predecessor of better-known Robot Odyssey, Rocky's Boots was aimed at a slightly younger audience, but is no less challenging and fun. Here is how the designer himself, Warren Robinett, founder of The Learning Company, describes this forgotten classic:

"[Rocky's Boots] won Software of the Year awards from Learning magazine (1983), Parent's Choice magazine (1983), and Infoworld magazine (1982, runner-up), and received the Gold Award (for selling 100,000 copies) from the Software Publishers Association. It was one of the first educational software products for personal computers to successfully use an interactive graphical simulation as a learning environment. It was a precursor to later simulation products such as SimCity and The Incredible Machine.

Rocky's Boots was a visual simulation that made it possible for upper-grade-school students to design simple digital logic circuits, using a joystick to move around circuit symbols on the screen and plug them together. The circuit components were AND gates, OR gates, NOT gates, and flip-flops. The colors orange and white were used to show the logic states '1' and '0' of the components, so that as the circuit operated, the signals could be seen propagating through the circuits, as if the electricity was liquid orange fire flowing through transparent pipes."

With excellent in-game instructions and tutorials that set high standards for edutainment titles, intuitive user interface, and a great gameplay that teaches as well as entertains, Rocky's Boots is a must-have for everyone, child or not, who wants to learn about how computer logic works. Fans of Robot Odyssey and Gertrude's Secrets in particular will enjoy this classic for ours on end. 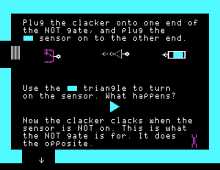