A pleasant surprise by master puzzler Jeff Tunnell, this is "edutainment" at its best. Essentially a science trivia games for kids, this game puts a new spin on the ideas with wacky cartoon characters, colorful locales, and different scientific gadgets (e.g. thermometer, barometer, etc.) that can be used on various objects in the screen to learn about their properties. Questions are all multiple-choice, with some surprises near the end. Overall, this is one of the strongest educational titles ever released, and it shows off Jeff's versatility as an astute game designer. 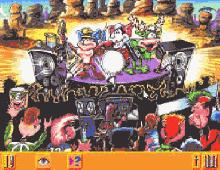