Mind Castle: Spell of The Word Wizard is a fun educational game with a neat fantasy plot, which goes as follows: nearly seven years ago, a young man named Smith disappeared while exploring an ancient tower in a remote countryside. Now YOU have come upon the same castle, only to be turned into a frog by angry wizard. In order to regain your human form, you must prove your worth by solving the wizard's toughest word puzzles (this is a scholastic wizard, obviously) hidden within objects that are scattered throughout the castle. Smith, as it turns out, has been renamed Smedley and became the wizard's servant, and his role in the game is to give clues when you are stuck.

Gameplay is a fun combination of adventure, puzzle-solving, and vocabulary building. You start out on the fifth floor, and must work your way downward by solving puzzles that will yield passwords to the lower floors. You only have two hours (in game time) to find your way out of the castle, but you'll gain time bonus often enough that this never becomes a problem. Most puzzles are of the "fill in the blank" variety, i.e. you are given a sentence, and must pick the correct word that fits that sentence's context. The blanks here are not actually blanks, but clues to the correct answer. Types of sentences are nicely varied-- sometimes you'll need to pick a synonym of the clue, while sometimes you must pick the word whose definition matches the clue. Puzzles are only "hidden" in the sense that you need only to click at every object in the room to find them. Another nice touch is that you'll only need to guess the password to pass each room, and you are given a descriptive clue and the number of letters in the password from the beginning. This means that you won't even need to solve puzzles in the rooms at all if you can guess the password right away (solving each puzzle yields one letter of the password).

With colorful graphics, fun word puzzles that teach concepts beyond mere spelling, and a user-friendly interface, Mind Castle is a great game for older kids (ages 8 and up) who want a fun vocabulary-building exercise. 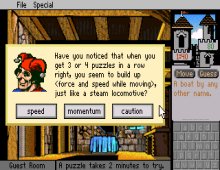