One of the best CD-ROMs ever made in any genre, period. The review of this outstanding CD in Business Week hit the spot so well I'd like to transcribe it here in full:

"When Microsoft Chairman William H. Gates III plunked down $31.8 million to buy a Leonardo da Vinci notebook from the Armand Hammer Museum in 1994, the art world was horrified. The Codex Hammer was one of only 20 such notebooks left by the Renaissance master, and it was about to disappear forever into private hands.

It turns out that the worries were overblown. Instead of renaming the document Codex Microsoft as some feared, Gates restored its traditional name of Codex Leicester, for the British noble family that owned it. And now Corbis, Gates's private art-licensing company, has turned the masterpiece into a CD-ROM that's a fitting tribute to a genius who was frustrated by the limitations of 16th century technology. Along the way, Corbis accomplished something very interesting. Most art CDs necessarily diminish the works they represent. Even an offering as well done as Corbis' Passion for Art can't deliver the impact of a massive Matisse dance mural when it is transferred to the small screen. But Leonardo da Vinci actually enhances the work it depicts.

The reason is simple. Once you get past the wonder of looking at a page written in Leonardo's hand, there's not much you can do. Few of us read Renaissance Italian, and fewer still can decipher the curious right-to-left mirror script in which the codex is written. The Leonardo CD offers an ingenious solution by providing a number of ways to view the pages. Clicking a ''mirror'' button reverses the writing, leaving everything else on the page untouched. So if you understand the language, you can read the text in Leonardo's fine Italian hand. Click the ''transcription'' button, and the handwriting is replaced by printed Italian, with the exquisite drawings intact and Leonardo's script faintly visible in the background. Click the ''English'' button, and the text magically changes into English.

I suspect the way most readers will want to approach the codex is by using the Codescope, a silly name for a fine idea. The Codescope is a sliding window you can move over the page like a magnifying glass. The text underneath turns to English or Italian, depending on your settings. This allows you to keep the flavor of the original page while you read it.

And the codex makes rewarding, if challenging, reading. The ideas are complex, and the pre-Newtonian approach to astronomy, hydraulics, and optics--the main topics of the codex--can be obscure. Fortunately, the CD, which [was] released in conjunction with an exhibit of the codex at New York's American Museum of Natural History, includes a number of ''tours,'' in which text, narration, animation, and occasional videos are used to explain Leonardo's ideas. Even when wrong, as when arguing that the moon is covered with water, he is fascinating. The CD also features sections putting Leonardo's work in the larger context of the Renaissance. Other treats are a gallery including 18 Leonardo paintings and dozens of sketches and pages from other codices.

Leonardo probably would be pleased. He spent his entire working life dealing with the Sforzas of Milan and the Medicis of Florence--powerful, ruthless, and fabulously wealthy people. CD technology would undoubtedly amaze and delight him. And Bill Gates as a patron probably would have made Leonardo feel right at home."

It is unfortunate that Corbis stopped producing CDs around 1997, and is no longer selling any of its CD-ROMs. Leonardo da Vinci is simply a must-have for anyone interested in the life and work of one of the world's most treasured geniuses. I'm not parting with my copy, and it will be far too demeaning to rip this wonderful CD to put on the site. Just keep your eye out for this one on sites like EBay. It's well worth whatever price you will have to pay for this truly forgotten classic. A must-have. 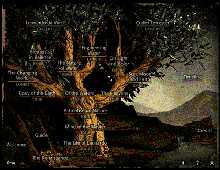