"Escher Interactive: Exploring the Art of the Infinite is a comprehensive look at the life and works of this extraordinary personage. It contains biographical information, games and puzzles, but most of its scope is dedicated to visual exploration of Escher's exceptional contribution to the art world.

The whole of Escher's graphic work and many of his drawings may be viewed in the game's Gallery section. You may scan the images chronologically, or use a search term to find particular subjects. Since many works have a tremendous amount of fine detail, you may enlarge the images to explore any portion therein.

While not himself a scientist, Escher astounded the scientific community with the mathematical preciseness of his creations. His protestations that he knew nothing of mathematics usually evoked the response that of course he had to know more than even he imagined. Much of his work consists of pictures or carvings which divide a plane into interlocking figures. This product contains a Tessellation Workshop allowing the user to take a single piece of one of Escher's symmetry drawings and, through distortion, pattern addition and coloration, create a masterpiece of his or her own. This is a fascinating and engrossing activity ? for a while. It loses its allure after you have worked with all of the pictures provided since your ability to alter them is limited.

Remember those Magic Pictures sometimes called "stareograms" which consist of an encrypted 3-D image lurking amidst what looks like multi-colored static? Some can see them, some can't and some just think they can't. Escher Interactive offers several of these for the staring, and the hidden images here are, of course, Escher figures. I've always loved staring into muddy static, but have never seen this type of image beyond the printed page. A lit monitor adds an amazing amount of depth to the 3-D unlike any viewing I've experienced. After shouting, "Come here! You've gotta see this!." however, and the general response being, "See what?," I'm not sure how clearly represented the images are. For me they extend into infinity...like a lot of Escher's works. He was, in fact, in endless pursuit of the ultimate graphic representation of infinity.

Escher was interested in the distortion produced when a spherical lens was placed over a two-dimensional picture space. There is a Spheres module here which allows you to experiment with this effect on ten Escher images. A Morphing module permits you to play with the gradual transformation of one form into another, and Animated Escher plays six different animations extrapolating the perceived movement of some of Escher's works into actual motion sequences.

There are two game/puzzle activities to challenge one's own spatial concepts. Convex/Concave (named after a print by the same name) tests your ability to judge a space that can be either convex or concave depending upon the perspective of the objects placed within it. You work against a timer to either place various objects onto planar surfaces, or skip them if there is no logical placement available. I was thrilled by a game-with-points activity, only there is no "winning" per se...your score just is. That's a bit hard to swallow for us goal oriented, reward seeking types. The second is Impossible Puzzles and believe me, some of them are ? although the designers insist that all are solvable. Each consists of a 3-D model alongside various disconnected shapes which, when properly assembled, will duplicate the model. They overlap in all cases, and as in many parallel life events, it's absolutely essential to know which one's on top.

This product is a must for Escher fans and for anyone interested in exploring his life and works. Even the merely curious will find something eye-catching here as he or she wades through Escher's exploration of the laws of the phenomena around us. "We live in a beautiful and orderly world, not in a formless chaos, as it sometimes seems," said Escher. Entertainment value is short-term however, and one can most probably view this as the multimedia equivalent of a coffee-table book. Nothing wrong with that, though. Think how unpretentious coffee tables would be without 'em." Must-have indeed, especially for anyone interested in how the relationship between art and science can be explored and interpreted. 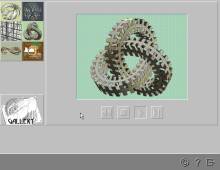