Bugs Bunny Cartoon Workshop is a fun little game from Novotrade/Hi-Tech Expression that lets kids create their own Warner Bros. cartoon by following a few simple steps. Kids first choose characters and the setting of their story, add their own text in word balloons, then animate the frame to watch the cartoon in action. The program isn't very versatile in a sense that each character you pick already has his/her own pre-set animation (the perky Road Runner, for example, will always run as soon as you animate the frame), but there is enough combinations and permutations to make the high replay value. Despite the name, the program includes many well-known Loony Tunes characters outside Bugs Bunny series, including Road Runner, Sylvester, Daffy Duck, and many others. Probably enough to satisfy the little fans of Bugs Bunny in your house for hours on end ;) 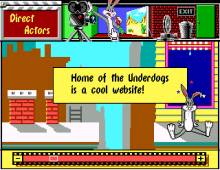