Funball is a fun and little-known shareware 2-player boardgame from Jeffrey Belt, published by Impulse Games. Your goal in this unique Checkers variant is two-pronged: either reach the enemy's base, or destroy all the enemy balls. The balls have different sizes, and bigger is better. When one ball jumps on another one, both balls usually merge into one ball, and the color of the resulting ball will be the same as the color of larger ball pre-merger. So if you can merge two balls of your color together to make a larger ball, or "take over" an enemy ball by moving one of your larger balls to the spot where the enemy ball is. Balls that reach a "critical mass" will explode - this means you can destroy enemy balls by moving your ball (no matter what size) onto a huge enemy ball that already reaches the critical mass. The balls will attempt to merge, and end up exploding instead.

What makes Funball unique - and quite ingenious - is the use of the board itself. In contrast to Chess or Checkers board where each tile is just a place to hold the pieces, many tiles in Funball have different characteristics that can help or hinder your game. Called "bases," special tiles range from cannon (which changes a ball into a cannon that can blow apart balls across long distances), slide (allows a ball to destroy another one even if it is bigger), armor (grows a cage around your ball, making it impervious to attacks), bubble (turn your ball into a bubble that can float across the board - must land on an empty base or else it will be popped), and many more. Making full use of these special bases is key to winning the game. If that isn't tricky enough, there is also a pesky spider that can randomly appear to lay eggs on the board - landing on these eggs make your balls bigger. If you don't want this element of randomness, you can toggle this off before starting the game.

In addition to an intuitive mouse-based interface, Funball has help balloons for all the commands, as well as a great on-line tutorial that teaches the basics (despite the "demo" misnomer on the menu screen). You can even use the "Board Editor" to create your own board and fill it with special bases of your choice. The computer AI is more than decent on "hard" mode, and you can play against another human player in hotseat. Overall, Funball is a fun and unique board game that deserves much more notice from boardgame fans, especially those who enjoy abstract board games with a lot of rules and options. Highly recommended! 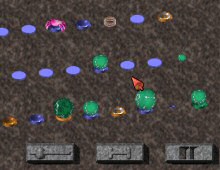