One of the world's first chess games designed for experts, Cyrus is also unfortunately one of the least known due to limited distribution. Which is a shame, because the game not only sports one of the best chess engines of its time, but also is one of the most playable. The game can be played from a novel isometric 3D perspective, and you can rotate the board in any direction. Traditional 2D overhead view is also available, although it looks very primitive compared to the isometric mode. You can turn the clock on or off, view analysis mode, examine game, or watch the computer play itself. The game has 16 (!) difficulty levels, although it takes such an excruciatingly long time to move in levels above 5 that you might as well stick with the lower levels, which already present enough challenge for an average chess player. Overall, Cyrus is an excellent chess program from a specialized chess software company (now defunct) that deserves a second chance. Highly recommended! 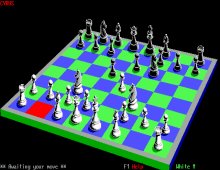