Ants is a very unique card and strategy game. You have 8 cards in front of you where each of them is within 3 different categories, building, battle and magic. You start with a certain amount of units within category and each turn you receive an amount of points equal to the number of units you have within the category. The more points you save the higher and better cards you will have available.

The aim with the game is to build up your castle until it reaches 100. The player that reaches 100 first wins. But as you can attack the opponent's castle it can take some time to build up as what you might just have build can be destroyed quickly again. In order to protect your castle you can build up a fence that will take the hits when you are attacked so it is important to build this up as well. When a card is used you will get a new one and it can be any of the cards within the 3 categories. In case you don't want to use your resources on any of the cards you can discard them easily.

The game also offers a mode where you can play until one of the players manage to destroy the other player's castle completely and while this is a very nice feature it can result in that the game continues forever as there are far too few battle cards meaning that both players continue to gain more sources and a higher castle. So even though one of the players will have twice as many things there won't fee enough options to attack in order to keep up with the upgrades the other player can do.

Ants is a very addictive game and it is so simple to play and learn that noone will have excuse for this. With a nice interface, nice sounds and simple but well done graphics you can't go wrong with this game. Thumps up to the developer.

Ants is a fun card-based strategy game with interesting gameplay mechanics, but is unfortunately too easy to warrant repeated play. The game is a freeware remakes of Arcomage, the card game from 3DO that is in turn based on the mini-game in Might & Magic VII. Your goal in the game is to either be the first ant (yes, an ant general) to finish building a 100-stories-high castle, or demolish your opponent's castle to the ground. The game is turn-based. Every turn, you are given 8 "action cards," from which you can only choose one. The number of resources required to carry out the action is noted on the top right corner of each card. The resources range from bricks (to build defensive walls or castle floors), weapons and soldiers (to attack your enemy's castle), and gems and magis (to cast spells). Your resources increase automatically every turn, but you can manually increase the amount by using certain action cards (typically casting spells). Cards for which you don't have enough resources to use are grayed out and cannot be selected.

The game's best part is the variety of action cards. These range from mundane actions such as build castle and attack, to more interesting actions such as summon a dragon to demolish 20+ floors of your enemy's castles and stealing some of your enemy's resources. Unfortunately, the game is far too easy - I beat it on my first try by demolishing my enemy's castle, who never seems able to build more than 10 floors of his castle. The ability to compete against another human player makes the game a bit more interesting, although your success still depends much more on luck (i.e. getting a good range of cards) than on strategic skills. If you like beer-and-pretzel strategy games that are fun for at least 5-10 minutes it takes to beat it, or if you enjoy Arcomage but don't feel like it's worth the $12.95 price tag, Ants fits the bill. 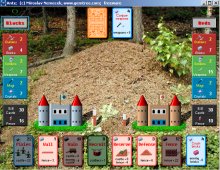