ZugyA is another excellent freeware shooter from Sprite, one of Japan's oldest freeware developing team who was behind Vampire, a great Castlevania clone. Although the game's graphics is not as sharp as GunViper or Amanagi, ZugyA has plenty of innovative features to set it apart from the crowd. Your goal in the game is to destroy space stations in each level within a strict time limit. But the stations are not huge spacelab-style targets, but are collections of small modules that are interconnected. Each module is different: turret modules, for example, will launch missiles at you, while airlock modules will launch enemy vessels. You have to therefore destroy all these "defense" modules before you are able to destroy the "headquarter" module that is key to winning the level.

The game is a lot of fun to play. In contrast to most vertical shooters where the enemies come at you from the top of the screen, you can fly anywhere in ZugyA with 6 degrees of freedom. There are also nice training courses to familiarize you with gameplay mechanics, as well as excellent afterburner effects. Another nice touch I like is how the game forces you to charge your shield before you can use it, so there is a small but important strategic element of deciding whether to use the stored-up plasma energy on the mega-shield, or on your laser. (A bit like Wing Commander, so to speak). You must be careful not to destroy the "headquarter" module too quickly, though, because doing that will destroy all the modules on the level, denying you the chance of collecting bonus items until the next level. So it is always a good idea to make the "headquarter" module the last item on your target list.

On the downside, the gameplay gets a bit repetitive due to the lack of variety in station modules or enemy ships. Every new level looks and plays much like the last one, except for the varying intensity of enemy fire. Still, the novel destroy-the-modules concept and nonstop action will keep the game enjoyable for a long while before you get bored. Highly recommended! 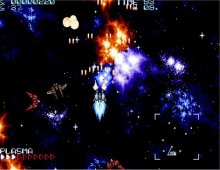