Zyclunt a fun anime side-scrolling platformer that not many people have heard about, mostly due to it being distributed only in shareware channels. The game is set in a dystopian future: in the year 2002 AD, planet earth was on the edge of social and economic breakdown due to incurable diseases, drugs, crimes, etc. Cyborgs and Bioroids were being exploited by the crime lords in their fight against the Establishment. You are Sou, member of Zyclunt-- a band of retired and discredited soldiers paid by the Establishment to undertake covert missions. After being drafted into the service, you finally are assigned your first mission as a marauding band of Mechadine had been sighted in D-C-14 district, where the regular meeting of the security council was taking place....

Gameplay is standard platform fare, but with excellent graphics and animation that make Zyclunt stand out from other shareware titles. The various kinds of robots and Cyborgs you encounter look like they are ripped straight out from popular Japanese comics (manga)-- it's a lot of fun just watching their cool designs and attacks. There are several cutscenes between missions that advance the story, and those are also very well done. In short, if you are a fan of futuristic action games with a lot of robots (e.g. Mega Man), you will have a lot of fun with Zyclunt even if the odds seem impossible at times. Highly recommended! 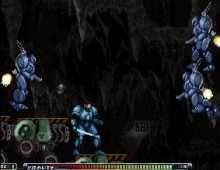