Like to play Prince Of Persia? Then you will love playing this game as well. The whole game and interface is based on the same as seen in Prince of Persia. The movements are the same, but the graphics have been spiced up a bit, and of course the game got it's own environment as well. Especially Zorro (you) and the soldiers you meet on the way are quite detailed and the surroundings fit well to the rest of the game.

You control the famous Zorro, and you will have to avoid many different traps while fighting enemy soldiers with your sword. You can use a whip on your way that will come in handy more than just a few times. I consider this game very difficult and you will have to try many times just before you know which way to go. And when you have to concentrate on fighting soldiers at the same you are up against quite a challenge. In this way it's not similar to Prince of Persia since is not that easy to figure out where to jump to and where there might be possible traps.

Overall a good game, and the atmosphere in the game is very well implemented within the game. It would have been nice if the developers had put a little more effort into the background of the game as you just start the game in a cave you have to get out off. At least there is a story with a few cut scenes in a game like Prince of Persia and that's why I wouldn't rate it as good as that one. Still really worth a try and especially if you are a fan of the above mentioned game.

Zorro is yet another lackluster game by Capstone that wasted the opportunity to leverage a well-known literary figure, in this case the handsome renegade Spanish hero. In this outing, you must help Zorro navigate the California wilderness as he races to stop the evil Don Cortez from discovering an ancient treasure.

The best way to describe the game is probably to call it "Prince of Persia without the finesse": the game clearly was 'inspired' by Jordan Mechner's classic, but it has neither the excellent controls of the Arabian prince, nor the devious level design. Zorro comes equipped with a whip and a sword, but the controls are so irresponsive it's almost impossible to use the sword effectively. You can barely block the enemies, and sometimes even the most simple stabbing requires repeated keystrokes. Fortunately, you can use the whip instead, which is not only more effective than the sword, but also elicit funny responses in the game (for example, you can drop the enemies' pants by whipping them from a distance).

The graphics are drab compared to Prince of Persia, with most of the palette dominated by different shades of brown and black. The CD-ROM includes clips from the Zorro movie, but they are quite grainy and not quite related to the game's plot. Overall, fans of the masked hero in black will have to wait for a game that truly captures the hero's daring exploits -- this below-average game isn't it. And if you're interested in the film clips, ask your nearest video store instead. 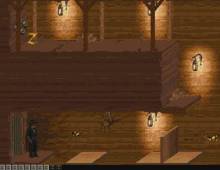