Zoom! is an interesting Pac-Man clone that ultimately suffers from repetitive gameplay and too difficult levels. Played from an isometric perspective, your goal is to guide a Pac-Man-lookalike as he gobbles up not dots, but *lines* on the playing field. Gobble up four sides of a square to turn it into a different color. You will gain access to the next level after every tile on the field changes color. The task is not as easy as it sounds, because you must avoid monsters that will deplete your hit points, including crabs, floating mouths, and others. Power-up items appear at random to help you along, although there never seems to be enough of them on each level. Worse yet, higher levels have green snakes that will undo your lines, changing them back to the original color. This means it could take a long time -- or maybe never-- to finish one level. By that time, you will probably get too bored of the repetitive gameplay to continue the game. A pity there isn't much more to the game to promote the quite original idea. Two-player mode can't help, either, because the basic gameplay remains the same. 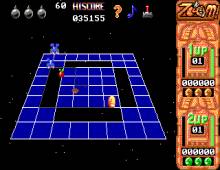