Zeitgeist is an excellent PC conversion of the Playstation game Jupiter Strike from Taito. First released only in Japan, this English PC port was released around the world by Interplay.

Zeitgeist is a great 3D shooter similar to Rebel Assault except with more freedom of movement. You control a spaceship from a third-person perspective, shooting everything in sight. The game's highlights are the excellent ship designs and great graphics, which features texture mapping, Gouraud shading, translucency, and other effects. The levels are also very well-designed-you will fly through an asteroid field in space, dogfight enemy ships inside a huge space station, and deal with gigantic end-level bosses that are very tough to beat. Although the game is a little bit like a rail shooter in that you cannot fly everywhere at will and the screen keeps "scrolling' past you, Zeitgeist does let you move the targeting cursor beyond your ship's movement range. Perhaps that is normal, but it is hard to tell since the targeting cursor is far away from the ship. With excellent graphics and well-designed anime ships and levels, Zeitgeist is a pleasant 3D shooters that should please all fans of the genre, even if the controls take some getting used to. 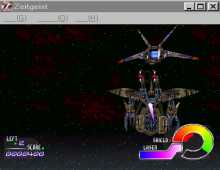